The Sound World of the Guitar 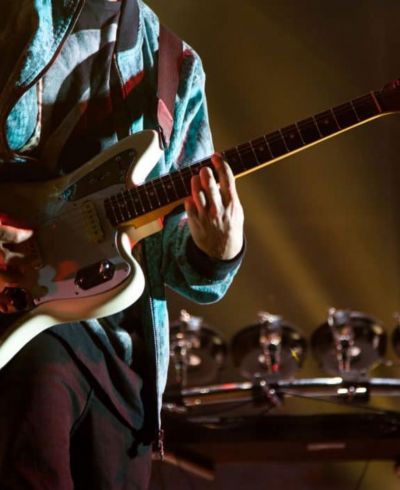 The variety in sound people have gotten from their guitar, with or without the use of added electronics, is staggering. Whether it be from slight modifications to the guitar, extreme modifications to the guitar, a certain chain of effects from pedals, or just thinking outside the box, people still manage to get new sounds out of the guitar. Here are some examples that I would like to share with you from my experiences.

Put My Thing Down Flip It And Reverse It
While this is not exactly a “new sound”, I think it is worth mentioning for creativity’s sake. Guitar monster Tim Henson from Polyphia has figured out a number of his riffs from listening to a recording of his in reverse, then working out a way to play it backwards! Would any of your own riffs sound interesting backwards?

Ever Get Mad At Guitar And Want To Hit It?
The foundation to modern acoustic guitar seems to be “just how much can I hit this in between playing it”. I’m only slightly joking. Completely valid techniques in this style include scratching and hitting various parts of the guitar. (Don’t do this to a guitar of value unless you understand the risk.) Try it for yourself: what different sounds can you get hitting your guitar’s body with your fingers, knuckles, palm? There is a ton of variety based on what you hit with and where exactly the guitar is being struck.

If you have not heard of Alexandr Misko, please do yourself the favor of looking him up. The creativity of his pop arrangements is amazing. Other artists in the same vein include John Butler and Andy Mckee. One of his tricks involves rubbing some sandpaper glued to his guitar body. While the teachers at The Lesson Studio might not be able to help with arts and crafts, us guitar teachers can definitely teach you how to hit your guitar in proper time and rhythm.

Thanks For Coming To My Performance Of “Tuning To E Standard”
Food for thought, the tuning peg on the guitar head will give you the smoothest glissando. Admittedly you probably won’t be able to gliss very far. Has it ever occured to you to try incorporating your tuning pegs into your music? It can even let you bend your harmonics! Check out the song “Passionflower” by John Gomm for a great example of this. Other artists that have used this idea include Alexandr Misko and Micheal Manring.

Wave It In The Air, Like You Just Don’t Care
Our guitar can get pretty bored just sitting on the same pair of legs day in day out, so why not let it get a new perspective on life? Play a harmonic, raise the guitar a bit (above the head is optional), and wobble it back and forth. It creates a pretty interesting wobbly sound! I learned this from Yale’s Department Chair of Guitar, Benjamin Verdery, when he asked the entire ensemble to do this at the end of his piece. I’ve incorporated this into a few of my pieces, and while the effect may be cool sounding, an audience will probably laugh before they notice any difference in sound.

I’m Not Out Of Tune, I’m Playing In Microtones
There exists a whole world of music nerds that study all the different ways of tuning instruments and seeing in what ways these different tuning systems sound different. That’s a rabbit hole I will leave for another day, but something worth checking out is microtonal guitars and music for Lou Harrison’s just intonation guitar. You’ll notice each string can have different fret positions on the fretboard.

This idea of doing strange things to get something new is not limited to guitar. No modern instrument has gotten to where it is today without a load of modifications throughout the years. Some are taken as the new standard, some stay as optional, and some are left by the wayside as failed ideas. Some lead to the creation of entirely new instruments! An example of this idea of modification as a new form of playing includes prepared piano. In your next lesson at The Lesson Studio, ask your guitar teacher if they have played their instrument in any funky ways. Can you think of any ways of playing your instrument “outside the box”?