Getting Over It – Stage Fright 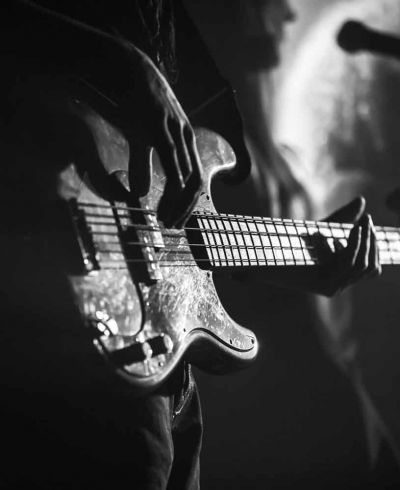 I’ve battled with stage fright since I started playing guitar.  The worst instance was my senior guitar recital in which I became so cripplingly nervous that I couldn’t move my fingers and I was sweating bullets.  I think most anxiety about performing stems from an idea that it is me vs. the audience.  When you’re on stage the fear is that people came here to be entertained and if they’re not clamoring with applause at every second, then you’re failing them miserably.  The first thing to remember is that this is likely not the case, and that no matter how the performance goes, you’ve learned something, you’ve practiced the art of performing and there is another opportunity tomorrow for you to improve.

I’ve asked a number of great guitarists (many legends in fact) how they got over their nervousness and none of them had a clear answer except that it takes time and practice.  But how do you practice?  For me the key is to create a scenario as close to your big performance as possible so that when the big day comes the only difference might be the venue or the size of the audience.

I’m going to share some of my practice techniques that, hopefully will help you out as much as they’ve helped me.

Practice Standing Up
If you play rock music, 90% of your gigs will require you to stand.  Plus you should think of it this way, which is easier, sitting or standing?  Pick the difficult thing and master it.  Make sure you have a strap that is well padded and that you adjust it so you can perform comfortably.  Most of the time it’s our left hand position that feels uncomfortable when standing up, so ensure that your wrist isn’t bending or strained, that your hand and forearm aren’t forming a very strict “L.”  Do all your practicing standing up: sight-reading, scales, repertoire, noodling, everything.  This will help you feel much more relaxed in this position and build up the right posture and mechanics for when you actually stand in front of an audience.  Additionally, standing is a position of confidence vs. sitting, so ideally standing while you practice will make you that much more commanding of what you are playing.  A lot of nervousness can arise when you are physically uncomfortable while playing because new limitations can cause you to make mistakes which can cause you to get embarrassed or anxious.

ALWAYS Move When You Play
Even if you are the only person in the band who is moving with the music, be sure you move.  The big thing here is to feel the beat and feel the music.  This goes beyond tapping your foot, it goes beyond counting.  Sway, nod your head, lean, stomp, however you feel, but get engaged with the music that is happening.  I do this when I practice picking drills, sight read, teach lessons, even when I’m in the pit orchestra and I have 20 bars of rests, I’m still moving and engaged with the music, with the performance.  This improves a few things for you.  Primarily it will help you with rhythm as it gets your whole body feeling the pulse and subdivisions of whatever you’re playing, it helps you know where you are.  Second it helps to relieve tension while playing, strangely getting your mind off of anything external and helping you focus on the music (seriously, try sight reading something while swaying to the pulse of the metronome and you’ll notice how much easier it is).  Third, as a performer it conveys emotion and engagement with the band, the music, and the audience.  I can’t tell you how many times people have told me I have good stage presence when all I’ve really done is sway, nod my head and feel the music, but it must look like I’m really into the music.

Make band rehearsal like performance
Don’t set up the room in a round.  On stage you will face the audience not each other.  There will be difficulties hearing each other and seeing each other, so set up your rehearsal room in a line as if you were on stage with the drummer and the bassist centered and toward the back of the stage, Put the vocalist front and center and guitar and keyboard stage left and stage right.  Figure out any monitoring needs you have, and don’t get offended if someone decides they don’t need to hear your parts to get through the songs.  Also take some time to rehearse some stage antics.  If you have lights, great, if not, pretend there’s great spotlighting near center stage and allow people to take the spotlight when they have a solo.  Practice backing up and giving the keyboard player the stage for a while.  Rehearse the dead air between songs, come up with noise interludes or good jokes.  Have the lead singer practice stage banter, promote your CD to the rehearsal space.   EVERYONE needs to practice standing on the monitor.  Will the venue have a catwalk? Pretend it does and play your guitar while powersliding to the end of that thing.  Get comfortable performing in front of the rest of your band, otherwise you’ll never be comfortable in front of a crowd.

Sing and make merry
If you’re already comfortable playing standing up and you’re feeling the music when you play you’re already going to feel much more comfortable on stage.  To take that further, I always feel that singing when I play takes away a lot of nervousness, possibly because of the extra intake and release of oxygen, but also because, once again you are more engaged with what you are doing.  If you’re the lead singer, the best part is that your voice gets to be louder than everyone else in the room, so let that feed your ego and just get into it.  If I’m not the lead, I try to connect with someone else in the band, sing with them, make faces, get showy.  Or do the same with someone in the crowd, point at them and make big, crazy eyes, and shout out the chorus.  The sooner you can stop caring about messing up and the sooner you can just start having fun, the sooner your stage fright will go away.

Practice, mess up, and do better next time
I once saw Bono ruin “Amazing Grace” in front of 10,000 people.  He forgot the second verse, stopped playing and just told a terrible joke instead, then the band came out and joined him.  At some point you may not have your group on stage to back you up, and you, like Bono will have to face that arena alone.  U2’s frontman has decades of experience playing show after show, hundreds per year, and so he knows that mistakes will happen and no matter what, the show must go on.

You need to get practice at performing in front of an audience and you need to increase that level of experience as often as possible.  But how? A really good thing to do is begin performing in a safer environment before you do something higher stakes like an arena show.  Here are a few ideas: Have a guitar jam with your friends but only bring one guitar so that everyone has to play a solo piece.  Go to an open mic.  Audition for bands.  Play on street corners or crank up the amps in guitar center so everyone has to hear you.  Let performing in public become a regular practice of yours and soon enough you’ll be over your fear.

If you really want to kick this practice routine into overdrive here’s some bigger ideas listed in increasingly more daring order:

Like I said, a great deal of it is practicing to perform, doing your homework, and being ready for anything; but the other part is practicing performance, getting over the adrenaline and anxiety you get from the audience simply by repeatedly being in front of an audience.